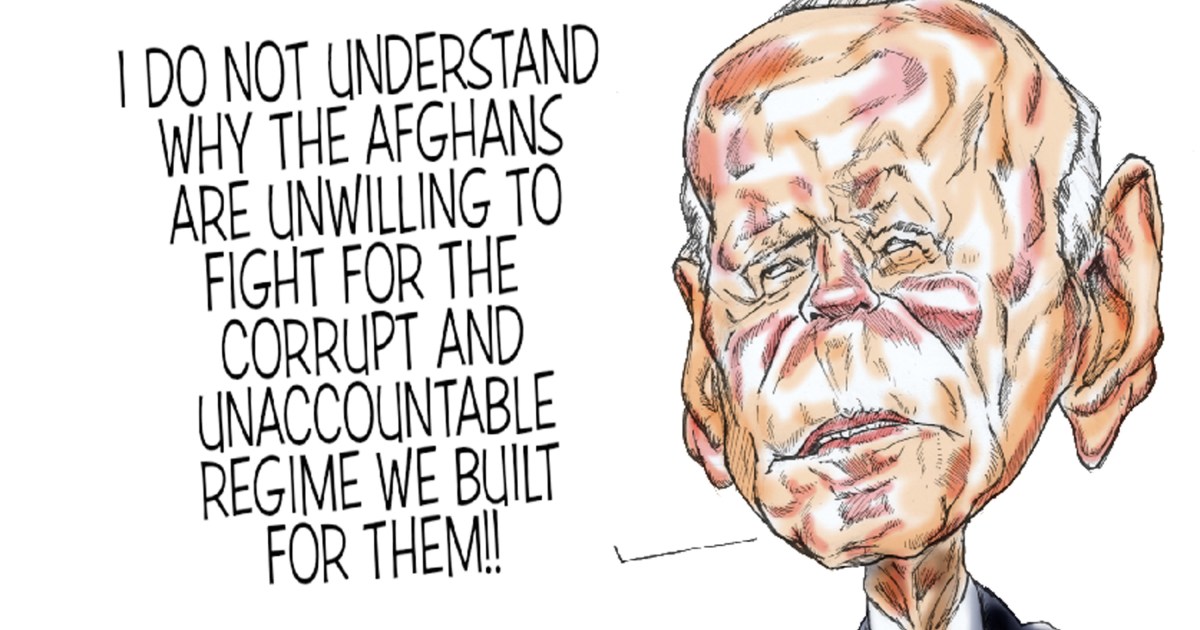 In his 2010 memoir Decision Points, former United States President George W Bush explained his rationale for the decision to invade Afghanistan in the following words:

“Afghanistan was the ultimate nation-building mission. We had liberated the country from a primitive dictatorship, and we had a moral obligation to leave behind something better. We also had a strategic interest in helping the Afghan people build a free society… because a democratic Afghanistan would be a hopeful alternative to the vision of the extremists.”

After two decades of Western occupation, however, there seems to be little sign of the “hopeful alternative” Bush predicted, at least judging from the desperate scenes at Kabul airport, where people have been scrambling to leave the country following the extraordinarily swift Taliban takeover of the country. This is despite the lives and treasure the West has poured into rebuilding Afghanistan’s institutions and economy, and into training and equipping the Afghan army and police.

There are important lessons to be drawn from Afghanistan’s fate by those engaged in the fight against extremist groups in Somalia where a similar nation-building experiment is being carried out by the African Union Mission to Somalia (AMISOM). For the past 14 years, African countries, with the support of the West, have deployed troops, drawn from Uganda, Burundi, Djibouti, Kenya and Ethiopia, to battle the al-Qaeda-affiliated terrorist group, al-Shabab, and to prop up Somalia’s feeble government. AMISOM also has civilian and police components aimed at helping rebuild civilian institutions.

Yet despite years-long efforts and the expenditure of some $900m annually, the government in Mogadishu remains weak and divided with little popular legitimacy. And though pushed out of most urban areas, the Islamist insurgency remains in control of much of the countryside and able to carry out devastating attacks in the capital at will.

Like Afghanistan, Somalia has seen some economic growth since al-Shabab was driven out of Mogadishu and many towns, with the World Bank estimating an annual GDP growth rate of 5-6 percent in 2015 and 2016. But the growth has mainly been urban-based, consumption-driven, and fuelled by donor support and remittances from the Somali diaspora.

The similarities with Afghanistan do not end there. In December 2006, following an ill-advised declaration of holy war against Ethiopia, the Union of Islamic Courts was driven from power by a US-backed Ethiopian invasion, bringing to an end what some called a six-month “golden era” during which Somalia caught a fleeting glimpse of tranquility.

The UIC, a coalition of Islamic courts backed by the country’s business leaders, had previously kicked out the warlords notorious for indiscriminate violence and instituted a Taliban-like strict interpretation of Islamic law, banning music, cinema and sports, and pressuring women to wear veils. But they also brought some semblance of normality with fewer guns in the streets of Mogadishu and relatively free movement. The airport was reopened and basic needs were generally provided for.

However, this ended with the Ethiopian invasion, with the armed wing of the UIC morphing into the al-Shabab insurgency which, by the time the Ethiopian army withdrew in 2009, had swept across the country and restricted the internationally-backed Transitional Federal Government to a few blocks within the capital, protected by a few thousand Ugandan and Burundian troops.

In a recent op-ed for the Financial Times, Nigerian President Muhammadu Buhari stressed that the lesson for Africa from the Afghanistan debacle is that military force is not enough to defeat extremists or guarantee the transformation of societies. “Although sheer force can blunt terror,” he wrote, “its removal can cause the threat to return”.

He argued that what Africa needs in order to eliminate terror is “not swords but ploughshares”, economic partnerships that deliver real benefits, such as jobs, to the masses. “The boots we need on the ground are those of constructors, not the military.”

While there is profound truth in what he wrote, it is not the whole truth. Economic growth, even broad-based economic growth, and investments in building up the security infrastructure of troubled states may be necessary, but it is not sufficient. A fundamental component of what is lacking both in Afghanistan and Somalia is government legitimacy based on the population’s participation in government creation and decision-making and the ability to hold it accountable for its failures – in short, real democracy.

“The Taliban are inheriting a different country than they left 20 years ago,” US Congressman Jake Auchincloss, a Marine veteran who led patrols through Afghanistan, said in a recent interview. “The literacy rate has doubled, the infant mortality rate has halved, access to electricity has tripled or quadrupled, there are ten times as many kids in school as there were 20 years ago, 40 percent of whom are girls. The Taliban are inheriting a country in which real progress has been made.”

The question for Western policymakers should not just be whether, as Auchincloss asked, the Taliban will maintain this progress, but why, despite it, the country still fell.

The idea that populations can either be frightened into compliance by the prospect of a return to anarchy or their allegiance bought by economic growth and token participation in the form of voting in non-credible elections is the mainstay of international interventions which tend to appease, engage and empower corrupt elites, while doing little to deliver accountability. But this has been proven wrong in Afghanistan.

As detailed by former journalist Sarah Chayes in a scathing reflection on the US occupation, “Afghans could not be expected to take risks on behalf of a government that was as hostile to their interests as the Taliban were … For two decades, American leadership on the ground and in Washington proved unable to take in this simple message.” During that time “cronyism, rampant corruption, [and] a Ponzi scheme disguised as a banking system” flourished, she wrote.

The Faustian bargain which trades real investment in accountable institutions for pliable, properly Westernised individuals promising gains in security and the economy has a short shelf life. And when interventions install, tolerate and protect rulers who manipulate elections and build superficial regimes characterised by impunity, they entrench fragility rather than stability and become part of the problem rather than a vehicle for solutions.

That is the true lesson of Afghanistan. And it is one that those working to help Somalia should pay heed to.

The views expressed in this article are the author’s own and do not necessarily reflect Al Jazeera’s editorial stance.