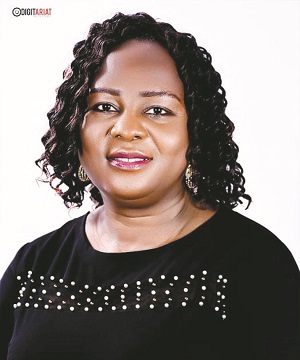 Dr. Biola Adimula is the new national chairperson, Society of Women in Taxation (SWIT), the women wing of the Chartered Institute of Taxation of Nigeria (CITN). She says with the dwindling income from the oil sector and the impact of COVID-19 pandemic and its emerging variants on the economy, taxation has the potential to fill the revenue gap. Noting, for instance, that a tax revenue collection target of N7 trillion to N8 trillion is achievable, she says SWIT, under her watch, has prioritised advocacy and sensitisation to help improve the tax system and boost tax revenue generation capacity. Assistant Editor CHIKODI OKEREOCHA reports.

The walked to the podium exuding the confidence of a thoroughbred professional who has what it takes to turn things around. And by the time she was done with her acceptance speech at her investiture as the newly-elected fourth national chairperson of the Society of Women in Taxation (SWIT), Dr. Biola Adimula left no one in doubt of her resolve to leverage the SWIT to position taxation as Nigeria’s ‘next oil.’

She hopes to achieve this by building a more efficient and sustainable tax administration in Nigeria and, ultimately, boost her tax revenue collection profile. Adimula, who is also a lecturer, lawyer and principal partner, Biola Adimula & Co., a firm of legal practitioners, said she would ride on the back of a robust collaboration, over the years, between SWIT, which is the women wing of the Chartered Institute of Taxation of Nigeria (CITN), and the Federal Inland Revenue Service (FIRS), the nation’s apex tax authority, to rev up advocacy and sensitisation programmes on tax policies and taxation.

“The SWIT under my watch will continue to support government’s initiatives on improving the tax system by organising forums and encouraging our women to tell the taxation story to women-fold, most especially women in other professional bodies, women executives and women-preneurs,” she announced, amidst thunderous applause by her audience gathered at the Peace Hotel and Suites, Tanke, Ilorin, the Kwara State venue of the investiture.

Adimula, who earned a Bachelor of Laws (LL.B) (Hons.) at Ahmadu Bello University, Zaria, in 1992; Master of Laws (LL.M), Obafemi Awolowo University (OAU), Ile-Ife, in 2002 and Ph.D. in Peace and Development Studies, University of Ilorin, Kwara State, in 2014, also said SWIT would act as an  interface between the government and the governed through advocacy and sensitisation to educate the public on the types of taxes to be paid and how to pay rightly, devoid of double taxation.

The 55-year-old Kwara State-born technocrat and Senior Lecturer, Centre for Peace and Strategic Studies, University of Ilorin, Ilorin, Kwara State, said the society would ensure that its campaigns led to more tax revenue generation for the government at various levels and performance of the attached responsibilities.

“Professional women, market women and artisans will be our main focus, while tax education through school debates will form a centre stage,” she declared.

She pointed out that the need to scale up advocacy to enhance more revenue generation through taxation had never been this compelling. She said in view of the situation of dwindling income from the oil sector and the struggles of the agricultural sector to feed the nation and earn income, internally generated revenue through taxation presents a viable source of income for the government.

She also said the effects of the COVID-19 pandemic on the tax system were too obvious to ignore. The pandemic, according to her, has impacted Nigeria’s budget by reducing tax receipts and increasing spending on programmes to save lives. “Also, medium-and small-scale entrepreneurs and blue-chip companies have been affected,” Dr. Biola added.

She also said developments in the global tax environment had made revenue generation via taxation a compelling proposition for Nigeria. “The recent decision of the G7 countries to impose “global minimum tax” on multinationals that operate across their jurisdictions has shown clearly that taxation has become a main source of revenue generation globally,” she stated, adding that considering that the world is a global village, there was no doubt that the happenings in the international tax environment would filter down to the local tax community hence, there was the need to keep women abreast of developments.

Adimula, who personifies the global push for improved gender inclusiveness, particularly in tax policies, has not hidden her intention to give women a voice. This was the basis of her assurance that, under her leadership of SWIT, “we shall leverage on our mother institute’s membership of the Global Tax Advisers Platform (GTAP) through the West African Union of Tax Institutes (WAUTI) to connect with women in other climes for dialogue on international tax matters.”

She said as the global tax environment is blocking tax leakages from their jurisdictions, Nigeria’s tax system is also undergoing significant improvement to achieve the same objective. According to her, this has been demonstrated with awakening of the yearly Finance Act cycle to support the Appropriation Act and make amendments to the tax laws.

“The Finance Acts 2019 and 2020 changed the face of the Nigerian tax system as provisions in the tax laws are reviewed to align with the government’s ease of doing business objective and expand the tax base in order to bring more taxpayers into the net,” she said, adding that the automation of tax administration and investment in technology embarked upon by the FIRS and most of the States Internal Revenue Services are coming at the right time.

Adimula emphasised that developments in the global space have shown that across the world, taxation is the “big elephant in the room” with governments collecting their fair share of income  from their respective jurisdictions. To her, Nigeria shouldn’t be an exception, as the country, she believes, literarily sits on a tax goldmine, given her huge potential for tax revenue generation.

For instance, the FIRS , according to Adimula, collected revenue of N5.26 trillion in 2019, which is equivalent to 59.8 per cent of N8.80 trillion of the target for the year. It also generated N4.95 trillion in revenue for last year, which represented 98 per cent of its target, despite the lockdown and the adverse effects of the pandemic.

Although the Senate initially approved a target of N7.6 trillion for the year, being 49.9 per cent increase over 2020 performance, The Nation learnt that it was later scaled down to N5.3 trillion, as a result of continued potential impact of COVID-19, which is still rearing its head.

For last month, being the month of filing for most companies, especially those with December 31 year-end, and based on the provisions of the Finance Act 2019 that mandates payment of taxes to be made for six months from January, the FIRS confirmed collection of over N650 billion in June.

Now,  Dr. Adimula is optimistic that “Going by the trend of FIRS performance from 2019 to June 2021 as highlighted above, there are potential for tax revenue generation within the economy’’. She hinged her optimism on the automation and digitalisation of tax administration.

“An efficient tax administration that blocks revenue leakages and enforces tax compliance will enable the FIRS achieve revenue collection target of between N7 trillion and N8 trillion going by the trend and June 2021 performance,” she told The Nation, on the sidelines of her investiture.

She, however, added that hitting this target would depend on the level of growth in the  economy. “Tax collection is a function of economic growth and having an environment that enables businesses to thrive and generate taxable profits.

“If corruption can also be eradicated from tax administration, I believe the target is achievable, because there are potential for tax revenue generation with the encouragement of voluntary tax compliance and the ease of paying taxes,” she said.

Indeed, the leadership of FIRS has introduced some initiatives to improve tax administration in Nigeria, viz: E-Filling, TaxPro Max and Auto Vat Collection.  It launched the TaxPro Max online returns filing and payments system to improve on the collection methods and level of compliance from taxpayers.

This was to, among others, provide a seamless returns filing and payment system which is permanently accessible to everyone 24/7 no matter the location, reduce the taxpayer’s physical contact with the tax office, improve the record keeping system for both FIRS and taxpayers for future reference, and to improve transparency.

Adimula said in furtherance of SWIT’s partnership with FIRS, the Society plans to sensitise the nation at national and state levels to make people familiar with these new terms and how they can help ease tax processes. ”This is why the CITN and SWIT should be adequately supported to propagate the tax message,” she said.

Some of her achievements at FIDA included computerisation of the Ilorin Prisons Registry-Oke-Kura, visits and free representation in court of inmates; pro bono services to women, children and indigent facing abuse; enhancement of women lawyers’ careers through attendance of international conference in Malaysia and London.

In 2008, she led 16 FIDA Kwara members to the World Women Lawyers Convention in Milan, Italy. In 2005, she secured the nod of the Kwara State Government for pilgrimage slots for members of one Jerusalem and one Hajj yearly until 2015 when it was stopped by the Federal Government. Before then, in 10 years, about 20 members benefited.

She raised funds to buy FIDA Kwara House to serve as a secretariat for the association.

However, her rewarding law practice and ingenuity in tax administration are not the only things that warmed her to the hearts of Nigerians from all works of life, including foreigners lucky to come her way.

For instance, she coordinated the completion, inauguration and equipping of 500- capacity Dining Hall for the physically challenged students and pupils of Kwara State School for Special Needs; obtained finance from the state government for the surgery of a two-year-old with a hole in the heart. Today, the boy is hale and hearty.

Despite achieving much in a male- dominated environment, Adimula does not feel threatened. “I have never felt threatened being in a male-dominated industry. The truth is that, I know my onions. I put perfection into whatever I do,” she told The Nation.

Her resolve to hold her own is a function of the support system she enjoys from her family members, especially her husband, as well as her efficient time management. “I usually wake up early to take care of the home front and I arrange my daily schedule for the academic and chambers attendance.  But above all, it is divine help and a supportive family,” she said.