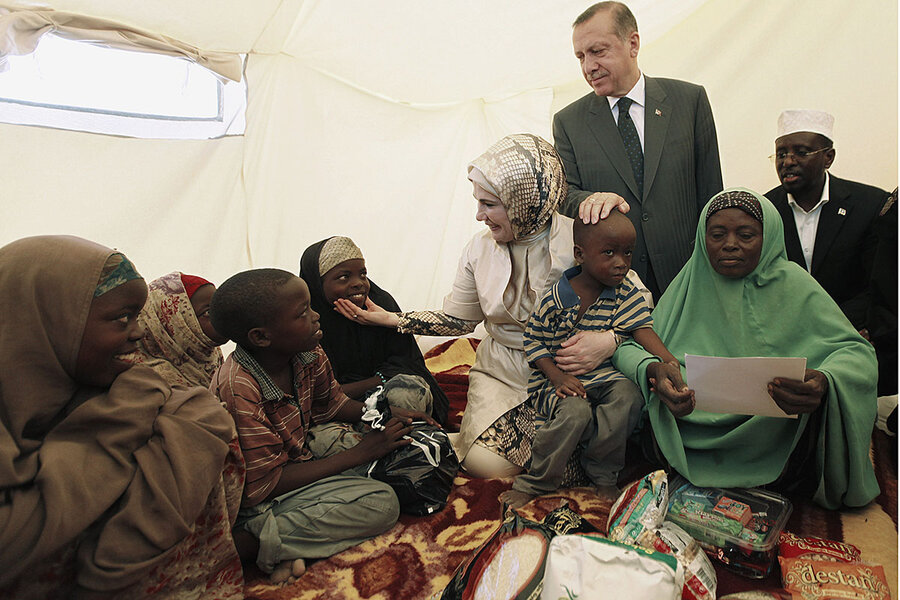 In recent decades, China has become the largest trading partner with Africa. The continent also has long-standing investment and diplomatic ties to European powers. Into this picture comes Turkey, a regional power in the Middle East that aspires to play a larger role in Africa, particularly in majority-Muslim countries where it has growing economic interests.

These countries include Somalia, which Turkish leader Recep Tayyip Erdoğan visited in 2011, the first non-African leader to do so in two decades. Turkey has become a significant donor and investor in Somalia; it has also built a large military base there. Trade between sub-Saharan African countries and Turkey was worth $10 billion in 2020, up from $1.35 billion in 2003.

One advantage for Turkey in its outreach to Africa is that it doesn’t carry the baggage of former colonial powers like France, which has faced protests lately in Mali over its economic presence there. Still, Turkey hasn’t always delivered on its promises, says Alex Vines, a U.K.-based analyst. “In some places, there is little engagement beyond an Embassy.”

Why We Wrote This

Turkey’s outreach to Africa has begun to take shape. What does it offer to African partners that other foreign powers may not?

An Olympic-size swimming pool in coastal Senegal. A military base in Somalia. And in arid Niger, a gateway to the Sahara desert, a remodeled, sprawling airport to be managed on Niger’s behalf for three decades.

These are only a few recent private and public investments in Africa by Turkey, an emerging middle power that’s making moves in a region that has historically received aid and investment from European colonial powers, and of late, from China.

Speculations abound on what this represents. While some chalk up Turkey’s moves to economic interests and competition with other regional powers, others point to national security priorities and domestic political agendas.

Why We Wrote This

Turkey’s outreach to Africa has begun to take shape. What does it offer to African partners that other foreign powers may not?

Federico Donelli, an expert on Ankara’s activity in the Horn of Africa,  says it’s likely all of the above.

“Undoubtedly, Turkish openness towards Africa is part of a broader framework aimed at building Turkey’s role as a global player,” says Dr. Donelli, a researcher at the University of Genoa. “Turkey in Africa seeks material gains and popularity, but also has reasons for regional competition with some Gulf states,” he adds, referring to its rivalry with the United Arab Emirates, which also has ties in East Africa.

Perhaps the pertinent question is how Turkey might smooth-talk African countries at a time when other investors face pushback. In the Sahel region, where hundreds of French companies run everything from mobile networks to mines, and which hosts some 5,000 French troops, there have been protests calling for France to withdraw. Citizens complain that their sovereignty has been undermined and their mineral resources exploited by the former colonial power. China’s growing footprint has also drawn ire across Africa. Will partnerships with Turkey prove any different?

Until the early 2000s, Turkish foreign policy was focused on trying to join the European Union. But as that goal receded, its interests shifted, including toward Africa. In 2005, it declared a “Year of Africa” and has hosted two Turkey-Africa summits. And President Recep Tayyip Erdoğan has visited the continent more than two dozen times, including a trip to Somalia in 2011 that was the first by a non-African leader in two decades. Turkey has become a significant donor and investor in Somalia, where it has also built its largest foreign military base.

Still, on a continent rich in resources and human capital, there’s plenty of competition. China and India are both eager to consolidate their economic and military influence, particularly in the Horn of Africa that borders the Middle East. China is now Africa’s largest trading partner.

Turkey has designated relations with Africa as a core pillar of its foreign policy, and opened 30 new embassies between 2002 and 2019, while Turkish Airlines is a major carrier on Africa-Europe routes. In 2008, the African Union designated Turkey as a strategic partner.

African countries have benefitted from this partnership. El Hadji Idi Abdou, an analyst in Niamey, Niger, says the international airport was in “total disrepair” before Turkey took charge. According to Turkey, since 1992 some 13,000 African students have won scholarships to Turkey while its aid agency is active in 22 countries. Trade volume between sub-Saharan African countries and Turkey rose to $10 billion in 2020, up from $1.35 billion in 2003, and Turkish companies have invested about $19.5 billion in the region.

Perhaps the most important reason for Africa’s romance with Turkey, analysts say, is that the country doesn’t carry the baggage of ex-colonial powers like France. Another is religion: Almost all of the countries Turkey has wooed have significant Muslim populations that are more receptive to a partnership with an Islamic power.

Turkey’s relationship with Africa is not saddled with “a complex or paternalistic spirit that most often characterizes the partnership between African countries and Western or American countries,” says Mr. Abdou.

And where Beijing has a reputation for financing arrangements that can saddle countries with heavy debt, Ankara appears so far to tread more softly.

“Unlike China, Turkey tends to involve the native population more” by hiring and training local workers, says Dr. Donelli, which he says shows an intent to transfer skills and know-how.

But time will tell what form Turkey’s diplomacy ultimately takes. In Niger, it signed a secretive defense pact last year that could allow for Turkish troop deployments, which has rattled Paris and other Western powers. Turkey is also using its military to secure its maritime interests in Libya.

Some analysts say Turkey’s engagement in Africa has been oversold. Alex Vines, director of the Africa program at Chatham House think tank in London, points out that one of Turkey’s diplomatic goals is to root out Africa-based religious networks linked to exiled Muslim cleric Fethullah Gulen, a rival of President Erdoğan’s whom he accuses of masterminding a 2016 coup attempt. (Other analysts say the Gulen affair is a minor motive.)

“Turkey is trying to compete by offering connectivity and ease of access to Turkey to grow business and connections,” Dr. Vines says via email. But “there has been some hype and the AU itself stated that Turkey had not delivered all it had promised. In some places, there is little engagement beyond an Embassy.”

There are also fears that relations with Turkey could soon turn sour in a region where oversight is mostly weak, if Ankara were to support unpopular governments. Reports of Turkish drone support for Ethiopia, where the government has been accused of war crimes during the war in Tigray, have spurred condemnation; Turkey has denied those reports.

Get the Monitor Stories you care about delivered to your inbox.

Mr. Abdou says that while a diverse base of partners can help African countries to develop, each country and its voters need to monitor whether Turkey, or any other foreign power, is empowering bad leadership and fueling corruption.

“Responsible citizenship is needed to hold leaders to account,” he says. “States, it is said, have no friends but interests. If African leaders prioritize their interests to the detriment of the interests of their peoples, the diversification of partners alone will not change anything.”