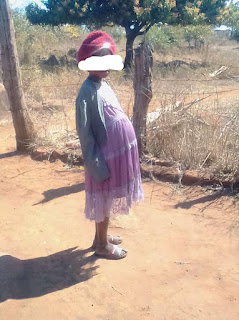 THE 14-year-old girl who recently lost her life during
child birth at an apostolic sect’s church gathering in Marange was forced out of
school while doing Form One in Mhondoro to get married to Evans Momberume, The
Manica Post can reveal.

Memory Machaya reportedly died around 9am on July 15 and
was secretly buried two hours later.

Memory, the last born child in a family of six, was having
her first birth.  She left behind a baby
boy who is said to be in the custody of his father. Efforts to get in touch
with Momberume were fruitless as no one had his contact details.

However, information availed to The Manica Post revealed
that the polygamous Machayas were planning to offer their nine-year-old
daughter to their in-laws as Memory’s replacement (chigadzamapfihwa).

Police could neither confirm nor deny the case, with
national police spokesperson, Assistant Commissioner Paul Nyathi saying they
were yet to receive such a report.

“Have you been in touch with our provincial office? We are
yet to get such a report. We will try to get all the finer details,” said Asst
Comm Nyathi.

However, provincial police spokesperson, Inspector Luxson
Chananda, was not available for comment.

In a telephone interview with The Manica Post yesterday
(Thursday), the Machaya spokesperson, a bitter Ms Alice Mabika, confirmed her
niece’s painful death.

Ms Mabika is demanding justice and says she and Memory’s
mother — Ms Shy Mabika — were barred from entering the church shrine after
their daughter’s burial. The Mabika sisters said their daughter was denied
medical attention at her hour of need.

Ms Mabika said from the information they obtained from
Momberume’s sister (name not supplied), those who attended to Memory on the
fateful day say she complained of a headache.

She said the ‘‘midwives’’ diagnosed that Memory had ulcers
in the mouth and nose and went on to rub her mouth with salt, while pouring
paraffin into her nose.

“We were told that five ‘midwives’ attended to Memory and
rubbed salt in her mouth, while pouring paraffin in her nose. We were told that
she had a seizure and hit her head on the ground.

“She died soon after delivering her baby boy and the church
members went on to bury her without involving us,” said Ms Mabika.

After getting wind of Memory’s death, her mother, a devotee
of the church who had not attended the church gathering in question, teamed up
with her relatives to attend her burial, but the worst nightmare awaited them
at the Marange Shrine.

The family was barred from entering the shrine and a
scuffle ensued as they sought to force their way in after spending the night
waiting to be granted access.

In an audio recording which was availed to The Manica Post,
the Mabikas, who were led by their brother, Patrick, are heard complaining
bitterly about the inhuman treatment they were being subjected to by the
church’s security team.

Said Ms Mabika: “When we arrived at the shrine around 2pm,
we were told to wait until the prayers were done at 6pm. The security team
checked us around 7pm, but they became evasive. Our pleas to be attended to
fell on deaf ears and we had to spend the night in the open.

“We remained resolute in our quest to see our daughter’s
body, but the security details would not budge. We even tried to engage the
service of our relative who is in the police force in Chinhoyi.

“We phoned him and he tried to talk to the church’s
security personnel, but they refused to entertain him over the phone,” she
said, her voice breaking with emotion.

Ms Mabika said her sister — Memory’s mother — was equally
bitter, but cannot do anything about it.

“Memory’s death devastated her and she is bedridden at her
home in Kwekwe as we speak. She cannot do anything about it as she respects the
wishes of her husband.

“People should not be slaves of these religious doctrines.
Our hearts are bleeding and we pray that one day justice will prevail,” she
said.

Ms Nyaradzai Gumbonzvanda, African Union Goodwill
Ambassador on ending child marriages posted on her social media platforms:
“This child’s death has created outrage. We are all angry because it is not a
single child, thousands of them are being sexually abused in this country. May
the perpetrator of this crime be arrested so that he faces justice? The
accomplices are known — those who gave away the child and those who took her to
the shrine are all guilty . . . ”

Mutare human rights lawyer, Mr Passmore Nyakureba chipped
in: “This story is heart-breaking. It runs against everything that we stand for
and believe in as a nation. This is a violation of the rights of the girl child
committed by paedophiles hiding behind the cover of religion.

“This is a case of child marriage. All those behind it must
face criminal prosecution as the deceased was a minor, the man behind the
pregnancy violated the law by being intimate with a minor. The circumstances
leading to the burial must also be properly investigated as they smack of every
deliberate effort to conceal a crime. I am hopeful that the relevant officials
from the concerned Government departments are leaving no stone unturned in
addressing this issue.”

According to the Constitution of Zimbabwe, the legal age of
consent for sexual activity is 16, while the minimum age for marriage is 18.
Manica Post