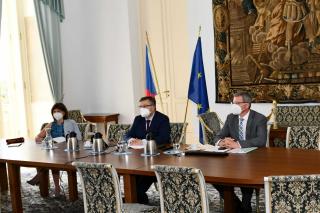 The two partners exchanged information on the current state of the Covid-19 pandemic in their regions, the prospects for the recovery of national economies and the possibilities of mutual cooperation in this process, all in the broader context of developing traditionally excellent Czech-South African relations. They were pleased to state that, despite the pandemic, a Czech tied financial donation project to South Africa worth a total of CZK 20 million was successfully implemented in the form of a medical equipment to five South African hospitals. In general, mutual trade has a steadily growing trend and Czech investments in South Africa are also increasing, of which Deputy Minister Tlapa mentioned few latest examples. “It is music to our ears”, replied Deputy Minister Botes, commenting that this is exactly the kind of partnership South Africa needs. The growing trend is, inter alia, positively influenced by the Economic Partnership Agreement between the EU and SADC implemented since 2016.

Martin Tlapa informed the partner about the Czech engagement in peace and security activities in Africa, especially in the Sahel region. The Republic of South Africa is also considerably involved in peacekeeping operations on the continent, the current situation within the South African Development Community, especially in relation to the political and security situation in the Cabo Delgado area of ​​Mozambique was therefore discussed. Discussion then continued on the possibility of synergies between the two countries in peacekeeping operations on the African continent. The South African experience from the recently concluded Presidency of the African Union and its role as a non-permanent member of the UN Security Council have been of particular benefit. African Continental Free Trade Agreement is in early stage of its implementation, Deputy Minister Botes was therefore interested in Czech experience with the common European market. “If you avoid the unnecessary bureaucracy, its concept is unequivocally positive: it creates jobs, boosts business and invites investors”, replied Deputy Minister Tlapa.

Concluding, both partners expressed hope for an early end to pandemic restrictions on international air transport, which will enable the planned liaison events. They also agreed that the mechanism of the consultations will be complemented by a road map that would evaluate progress made in bilateral relations during the period between consultations.