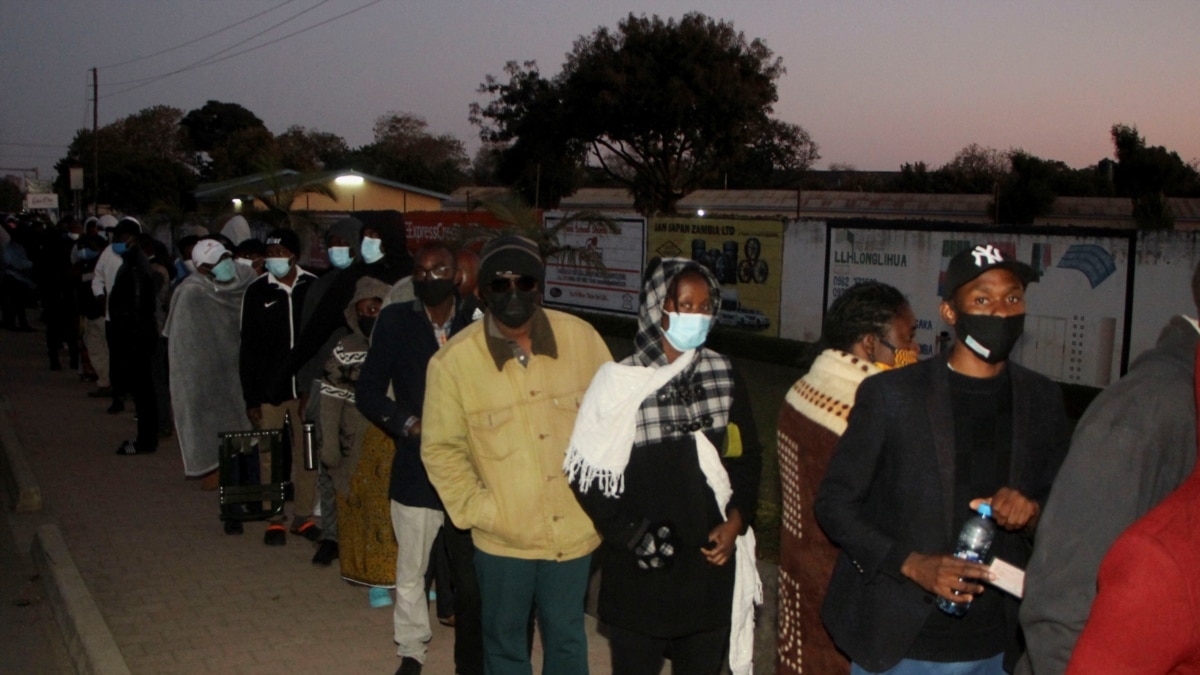 Zambia election officials say they will announce the outcome of Thursday’s elections within 72 hours after the last citizen voted late in the night.

“The numbers we’ve seen are quite unprecedented. And for us as a commission, this gives us a sense of pride. Because we look at the total number of registered voters that is slightly above seven million and we look at the queues that we have experienced on poll day, we have nothing but a sense of pride,” said Luhanga.

Some voters began standing in line at the polling stations around 1am Thursday – five hours before voting began.

Choolwe Hampondela was among those who were in line hours early at the Kabulonga Boys Secondary School polling station in Lusaka. Election officials said some people had slept at the school to ensure their place in line.

“Actually I didn’t sleep. I’ve been waiting for this day for the past five years and I’m glad it’s here today,” said Hampondela. “I just want to exercise my rights as a youth. I’m very excited about this one.”

Lucky Kawaya was not put off by the long queue at Vera Chiluba Primary School polling center in Lusaka.

Analysts had expressed concern about potential violence during the elections. Clashes between supporters of the governing Patriotic Front (PF) and partisans of the main opposition United Party for National Development (UPND) alliance left two people dead in one constituency in Lusaka earlier this month.

The violence, officials say, led to the deployment of the military to that constituency to help maintain law and order. The electoral commission also imposed campaign bans in the constituency. It, however, lifted the restriction after the military was sent to other parts of the city to keep the peace.

Thursday’s general election was mostly peaceful despite reports of violence in parts of the country. The electoral commission’s Luhanga says at least one person died during voting.

“It’s quite interesting that despite the country being mostly peaceful, we have received reports of violence specifically in the southern province of Zambia as well as the northwestern province,” Luhanga said. “And unfortunately, for northwestern province we have recorded a death. This, we are working with the Zambian police to establish what happened and because it’s a criminal nature we’ll have to have the police deal with it holistically.”

Officials of the African Union Poll Observer Mission said the process was peaceful. Representatives of political parties at the polling stations they visited, they say, had no problems and were pleased with how the elections were administered.

Former Sierra Leonean president Ernest Bai Koroma, who led the AU observers, told VOA he was pleased with how Zambians behaved during voting.

Before election day, Koroma met with many stakeholders, including incumbent President Edgar Lungu, his main rival, Hakainde Hichilema, other presidential candidates, civil society and religious groups. He called on the candidates to accept the outcome of Thursday’s vote.

“We have cautioned them, even those that have concerns that yet concerns are there, we will address the concerns. It is all part of building the democratic process, [and] we will continue to engage. But the concerns should not cause anybody to reject the outcome,” said Koroma, assuring that, “there are constitutional methods to adopt if you are in disagreement with the outcome.”

The electoral commission says results from urban areas have begun trickling in. Officials say they will give regular updates to keep the country informed about the vote-counting process. Election analysts say they expect the results of the presidential election to be declared this weekend.

However, if none of the 16 candidates capture more than 50 percent of the vote, there will be a runoff.