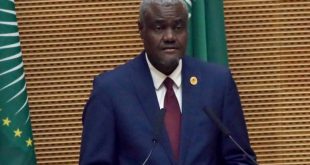 The decision of AU Commission chairperson Moussa Faki Mahamat has been considered as “shocking”. (Photo: Taken from www.dw.com).

The personalities, who include people from diverse political and cultural movements and represent different nationalities, backgrounds, political parties, and religious associations, signed a protest petition which the Global Campaign to Return to Palestine had called for.

Global Campaign to Return to Palestine members had called on Africans to support the petition and take concrete measures “to bring down the illegitimate decision that goes against African interests and humanitarian values.”

The signatories likened the Palestinian cause to an African struggle, and pointed to the longstanding support that Africans have offered to Palestinian factions and liberation movements.  Africa and Palestine form one inseparable cause, and they are struggling against colonial powers, they said.

The petition denounced the decision by AU Commission chairperson Moussa Faki Mahamat as “shocking,” saying the move violates the principles upon which the African Union has been established.

The signatories said African and Palestinian nations stand together against normalization of diplomatic relations with Israel, arguing that recent steps by some Arab states and the AUC’s chairperson are in line with U.S. and European guidelines.

They called on the African Union to withdraw the decision, and to apologize to African nations and the Palestinian people for the offensive measure.

On August 7, Algerian Foreign Minister Ramtane Lamamra chastised the chairman of the AU Commission for defending his decision, saying insistence on the measure will eventually result in the breakup of the regional organization.

“Moussa Faki Mahamat sought to defend himself and accordingly made the latest remarks. He is unaware of the consequences that the decision will cause,” Lamamra said in an interview with Algeria’s al-Fadjr daily newspaper.

Earlier, Faki had defended the move to admit Israel as an AU observer member, saying he made the decision on the basis of the recognition of the regime and the restoration of diplomatic relations with several AU member states.

According to a report by London-based online newspaper Rai al-Youm, Algeria has officially begun forming a group of African countries opposed to Tel Aviv’s membership in the African Union in order to preserve the principles of the union and to support Palestine.

Lamamra has stressed that his country would not stand idly by the African Union’s move which was adopted without any consultation with its member states.

On July 22, Israel attained observer status at the AU after nearly 20 years of lobbying.  Israel previously held observer status in the predecessor Organization of African Unity until 2002, when the organization was disbanded and replaced by the AU.