The African Development Bank Group’s shareholders have shown strong support for the Bank’s proposals to tackle the Covid-19 pandemic, and this as the continent faces the possibility of a third wave of infection amid poor vaccine access.

This emerged from the 56th Annual Meetings of the Bank Group. The three-day event, which ended on Friday, included the 47th meeting of the Governors of the African Development Fund, the Bank’s concessional lending arm. Part of the proposal is that the Bank, the continent’s only development finance institution with a AAA credit rating, act as a conduit for International Monetary Fund (IMF) special drawing rights, which it would then on-lend to African countries.

African Development Bank Group President Dr. Akinwumi A. Adesina proposed an African stability mechanism, modeled on a European one, to act as a firewall against external shocks. Adesina also pledged that the Bank would strengthen support to African countries as they tackle the pandemic’s economic and health impacts.

Looking ahead, Adesina said the Bank would invest heavily in domestic vaccine manufacturing and in Africa’s healthcare system, noting that only 51% of public health facilities have basic water and sanitation, and only 31% of healthcare facilities have electricity. The president underlined the fact that Africa imports 60-70% of its pharmaceutical drugs.

On the final day of the meetings, Adesina said: “The lives of 1.2 billion people in Africa are at risk… we must give hope to the poor, the vulnerable, by ensuring that every African, regardless of their income level, gets access to quality healthcare, as well as health insurance and social protection.”

Kenneth Ofori-Atta, Ghana’s Finance Minister and Chairperson of the African Development Bank Board of Governors, cautioned at the start of the meetings that Africa risked being left behind as a result of the pandemic and was “staring down the possibility of a lost decade, where its economic trajectory pulls further away from that of the rest of the world.” He said the African Development Bank should take a leading role in the continent’s recovery.

“Our bank, distinct in its role, has to be at the center of Africa’s build-back through targeted support to tackle Africa’s development challenges and lay the foundation to respond to future challenges,” Ofori-Atta said.

To date, less than 1% of Africa’s adult population has been fully vaccinated against Covid-19, even as Africa confronts new variants and fast rising cases while the continent’s health and economic responses are hampered by tightening fiscal constraints.

Green growth was high on the agenda. In a panel discussion , Alok Sharma, British Member of Parliament and Conference of the Parties (COP) 26 President, said it was vital that developed countries deliver on a $100 billion commitment to tackling climate change. Patrick Verkooijen, CEO of the Global Center on Adaptation (GCA), lauded the Africa Adaptation Acceleration Program, a joint initiative between the GCA and the African Development Bank to mobilize $25 billion to accelerate climate change adaptation across Africa.

For the second successive year, the Bank’s 81 member countries met virtually, a poignant illustration of how the pandemic continues to disrupt daily life and work. Ghana will host the next Annual Meetings in 2022. 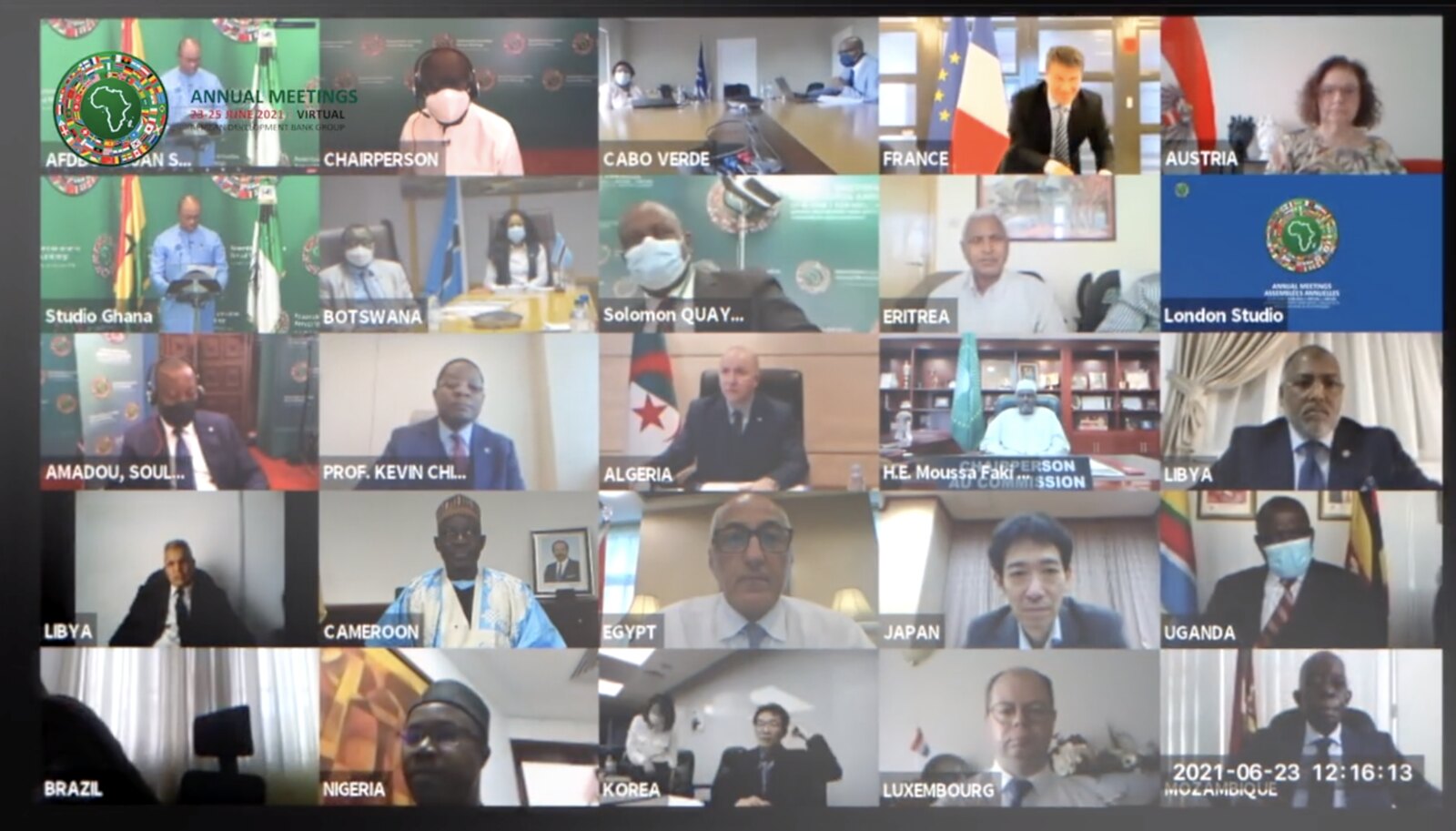